Economic activity is booming as distribution of the vaccine has allowed some economies to open up, pushing stock market returns higher. US stocks had their best first half in 23 years. Robust GDP growth has been limited to the US and China though as outbreaks of Covid caused lockdown and/or restrictions elsewhere for much of the April – June period.

With low interest rates and strong growth, the threat of rising inflation became a focus of markets over the last quarter. The US Consumer Price Index (CPI) reported a year-on-year growth rate of 5 percent for May, outstripping even the 3.3 percent average for the OECD countries.

Central banks have been less concerned than investors. The Bank of England announced that its “central expectation is that the (UK) economy will experience a temporary period of strong GDP growth and above-target CPI inflation, after which growth and inflation will fall back”.

Official statements from the US Federal Reserve and the European Central Bank sang the same tune, and reassured investors by stating that the recent rise in consumer prices is transitory. 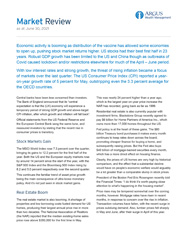 The MSCI World Index rose 7.3 percent over the quarter, bringing its gains to 12.2 percent for the first half of the year. Both the US and the European equity markets rose by around 14 percent since the start of the year, with the S&P 500 Index and the Bloomberg 500 Index rising by 8.2 and 5.0 percent respectively over the second quarter.

This continues the familiar trend of asset price growth being the main consequence of ultra-loose monetary policy. And it’s not just seen in stock market gains.

The real estate market is also booming. A shortage of properties and low borrowing costs fueled demand for US homes, producing their largest annual price rise in more than two decades. The National Association of Realtors (the NAR) reported that the median existing-home sales price rose above $350,000 for the first time in May. This was nearly 24 percent higher than a year ago, which is the largest year-on-year price increase the NAR has recorded, going back as far as 1999.

Residential real estate is also currently popular with investment firms. Blackstone Group recently agreed to pay $6 billion for Home Partners of America Inc., which owns more than 17,000 homes throughout the US.

Fed policy is at the heart of these gains. The $80 billion Treasury bond purchases it makes every month continues to keep rates down across the board, promoting cheaper finance for buying a home, and subsequently raising prices. But the Fed also buys $40 billion of mortgage-backed securities every month, which has a more direct effect on housing finance.

Clearly, the prices of US homes are very high by historical comparison, and the effect that a substantial decline would have on people’s economic welfare would arguably be a lot greater than a comparable slump in stock prices.

President of the Boston Fed Eric Rosengren recently told the Financial Times: “I do think it’s worth paying close attention to what’s happening in the housing market”.

Price rises may be tempered somewhat over the coming months, however. Mortgage rates have risen in recent months, in response to concern over the rise in inflation. Transaction volumes have fallen, with the recent surge in prices subduing demand. Also, lumber prices fell sharply in May and June, after their surge in April of this year.

The view that inflation is temporary is reasonable when one considers its source. While the outlook for demand is far from clear, there continues to be some supply constraints throughout the global economy. Some are related to Covid, which clearly caused merchandise volumes to crash. Another source is the lack of shipping capacity. Trade policy of the Trump Administration resulted in the freight industry reducing its investment in anticipation of a reversal of globalization.

Bloomberg reported that since March 2019, the capital investment of the world’s largest shipping line, AP Moller-Maersk, was just $2.9 billion, which is not a great deal more than it invested in a single quarter during 2014. If trade continues at pre-pandemic levels, then shipping companies will add capacity, but it will take quite some time to do so. In the meantime, supply bottlenecks will continue to have an upward impact on prices.

The other side of supply shortages in the inflation data is a resurgent demand across the US and in Europe. A recent IHS Markit (purchasing managers/PMI) report showed that Eurozone business activity expanded at its fastest rate for 15 years in June and that UK business activity was also very strong.

The report comments that “The (Eurozone PMI) data set the scene for an impressive expansion of (gross domestic product) in the second quarter, to be followed by even stronger growth in the third quarter.” It seems that European consumers are travelling to work again and are starting to again frequent bars and restaurants.

Manufacturing activity in the US increased for the fourth consecutive month to its highest level since the PMI survey started in 2007. Activity in the service industries dipped but remained near record levels.

There’s little reason to feel we may be heading towards a destructive 1970s style inflation environment. It’s taken a Herculean effort by fiscal policy makers to move the economy in the right direction. The Biden administration for example recently secured a stimulus package worth around $1 trillion, earmarked for US infrastructure projects.

Even though the savings rate has been high and could potentially finance consumer spending in the months ahead, it’s difficult to envisage a sustained boom in private sector credit and spending that would create a problematic inflation cycle.

It’s important to be wary of turning points and changes in market momentum. Many employers are having difficulty in hiring new employees to fill what are now record job openings. Most of these issues are temporary, though there’s also a good chance that a lot of wage and price rises will remain longer than anticipated.

High valuations and an outburst of the delta variant could cause a stall in current market directions.